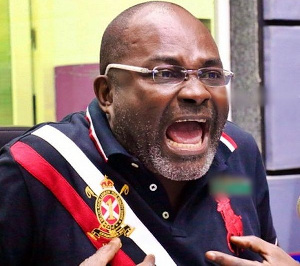 Member of Parliament(MP) for Assin Central, Kennedy Agyapong says the National Democratic Congress has plans to kill Kyei Mensah-Bonsu and others ahead of the 2020 election.

According to him, he has intel on the fact that the Majority leader of Parliament has been lined up as the next Member of Parliament(MP) who will be eliminated as part of a plot to create insecurity in the country.

The Member of Parliament who was speaking on Accra-based Oman FM monitored by MyNewsGh.com said he has informed the Majority leader of this evil intention but he seems not to believe him.

“Hon Kyei Mensah is a very nice guy but whenever you tell him something he does not take it seriously. Two days and two different sources have told me he’s next in line to be killed. The first one told me they were on ten motorbikes following the Kyei Mensah. I don’t know what he has done to them. They say he has been an MP for long, that’s just their reason.” He revealed.

He added that the next after Kyei Mensah will be Sarah Adwoa Safo and then Hawa Koomson who they have said they will kill.

We’re looking for Kofi Adams to serve him our injunction suit...

WHY NIGERIA WILL NOT BURN BY GREG ODOGWU (Citizen Smith)

Jean Mensa evading cross-examination because it will expose irregularities in 2020...

Tempane DCE unhappy with sluggish nature of NIA in his district

Akufo-Addo is not corrupt, let’s do clean politics – Allotey Jacobs