There is unease in the air in the Kassena-Nankana Municipality after the Irrigation Company of Upper Region (ICOUR) locked the canals supplying water to farmlands from one of West Africa’s largest agricultural dams— the Tono Dam.

Several advocates for food security and hunger relief in the Upper East Region, where several farming communities have been affected by the closure of the canals, have described the action the ICOUR has taken as inhumane, unreasonable and a mockery of the Planting for Food and Jobs policy initiated by the Government of Ghana (GoG).

The ICOUR has blocked the waterways to pave the way for a rehabilitation project to be carried out on the canals. But the food security promoters say the action rather exposes the company’s “insensitivity” towards the farmers for sealing off the waterways whilst the contractor who has been awarded the reconstruction project has not even reported at the site to commence work.

The most affected are pepper farmers whose crops are wasting away on several hectares as their farmlands have been starved of water since the gates to the canals were locked on Thursday 31st December, 2020, reportedly at 24 hours’ notice. When newsmen visited Bonia, one of the settlements in the municipality, on Monday, some devastated farmers and apprehensive young men could be heard saying government should be ready to expand the Navrongo Central Prisons to accommodate more inmates because some affected farmers, who had nowhere to turn in the wake of any pre-harvest loss, might resort to some unlawful means to survive.

“Our pepper is dying for lack of water. We just want the government to tell the ICOUR’s Managing Director to open the canals, allow us three months for our crops to mature for harvest and, then, the contractor can come in to do the construction work on the canals for us. If I lose what I have invested, I don’t know where I will go with my family,” Batungwo Alorenwo, displaying some withered pepper herbs for the press to see, lamented on his six-acre farm. 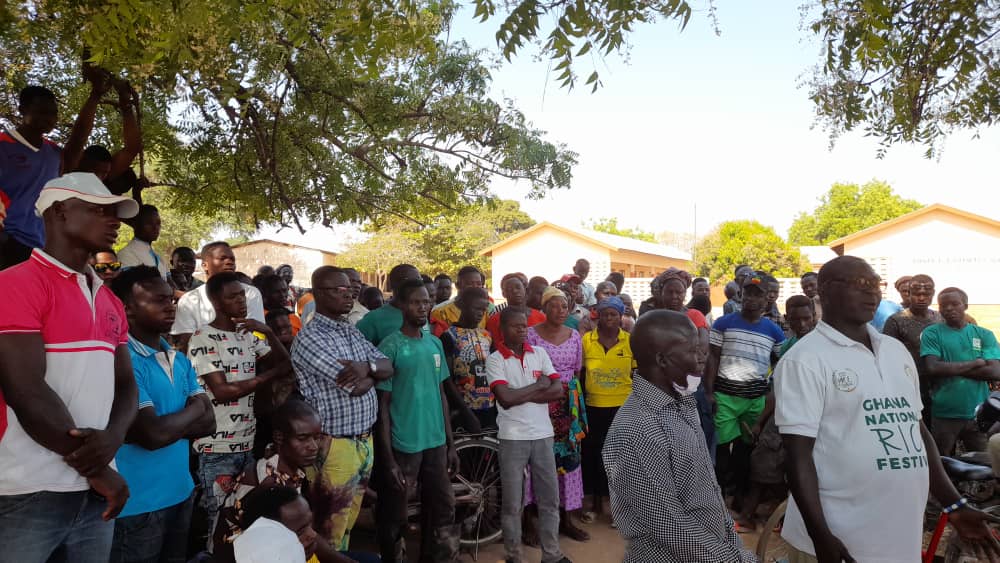 Another grief-stricken farmer, Tummuriwo Akumbasia, hoisted a bunch of dead pepper herbs in front of news cameras, and begged: “We normally farm our pepper from August to May. See my pepper; they are dying because there is no water. We are pleading. We pleaded with the ICOUR manager to give us water up to March; he refused. We have spent a lot. We should get our money back. For weeding alone, I have spent Gh¢5,400, and have used forty-six bags of fertiliser. One bag of fertiliser is Gh¢135. And I have debts to pay.”

Currently, large volumes of water, which some farmers say should have been running through the locked canals to irrigate the cultivated croplands, are being redirected to areas where the water is said to be least needed.

The ICOUR has come under fire from some observers who say the release of the water to “where it is not wanted” is unpardonable wastage of resources that should be going to the drying farms.

More than a few young crops have withered completely at different farming locations six days into the closure of the canals. In the intervening time, affected farmers whose peppers are still immature are engaging women to assist in harvesting them whilst they are still green and bag them for sale at giveaway prices. It is the only measure they are taking to cope with a rare pre-harvest loss that has beset them with a “last-minute” warning.

“We are harvesters. We harvest pepper. We come here every morning in search of menial jobs. This is the only job we find at this time of the year. When we received the news that ICOUR had shut water supply, we were really disturbed because that would mean the end of our jobs.

“Normally, the farmers pay each woman Gh¢15 per day and an additional Gh¢2 for food. Ever since they locked the water, the farmers are contemplating to reduce the amount of money they give us per day. We are appealing to government and ICOUR to open the canal to sustain our source of livelihood,” said Awupoli Agaah, a mother of five.

Whilst a veteran farmer, Samuel Abapina, expressed fears that the closure of the canals could prompt the young people in the affected areas to migrate to the cities and end up acquiring unrewarding jobs there, another farmer, Nelson Kampeh, said the losses farm owners were bound to incur should the canals remain shut would worsen the adverse impact of the floods the farmers had already suffered with their households during the last rainy season.

“They should give us just two months to harvest. After that, they can lock the canals to do the rehabilitation work for us,” the spokesperson for the farmers, Isaac Kubamuri, added his voice to the pleas.

When Starr News contacted the ICOUR’s management on the issue, the company’s Operations Manager, Sebastian Bagina, said the company had given the farmers two months’ notice about the impending rehabilitation work and had told them to not engage in any cropping activities until the rehabilitation project had been executed. He said the company’s management had delivered the warning when it met with the farmers at least two times; but the farmers, according to him, did not heed the warning.

He, however, gave a hint that the management might, in consultation with some other stakeholders, consider the pleas of the farmers by entreating a sub-contractor, whom he said had arrived in Accra with equipment from India to start work on January 10, 2021, to wait for a while. A main contractor and a sub-contractor are involved in the execution design for the rehabilitation project. The sub-contractor, Mechatronics, an Indian electronic firm, is to install new gates with automatic devices on all the canals within the irrigation system. The main contractor, the Top International Engineering Corporation (TIEC), a Chinese company, is to rehabilitate the canals themselves.

NDC does not want this country destroyed–Asiedu Nketia

My son not in private school; apologise or face court —Education...

Contempt trials won’t save you from credible charges of partisanship if...