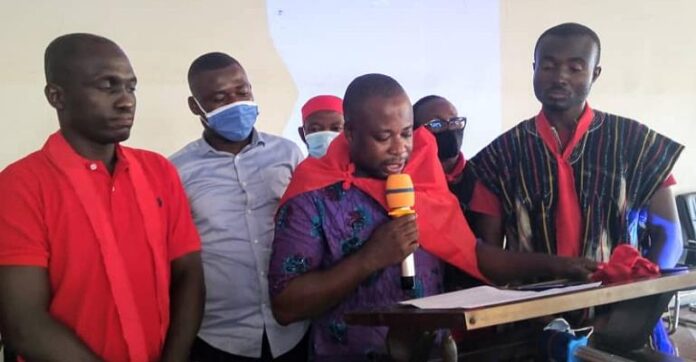 A group of aggrieved contractors has said they will not have any other option than exposing all Metropolitan, Municipal and District Chief Executives who collected bribes from them before awarding contracts for the construction of ultramodern toilet facilities across the country.

On Tuesday, the contractors in a press conference said some MMDCE’s collected between 5 to 15 percent from them, before awarding them contracts knowing very well that Ghana First Company limited took only 2 percent.

The decision came up following the government and for that matter Ghana First Company’s failure to pay them their contractual sum after 60% completion of projects.

The contract was awarded to individual contractors between the period 2017 and 2019 and all contracts according to them were prefinanced.

Per the contractual agreement, after 60% completion of the project, “the amount involved shall be paid to the contractor”.

They said at a press briefing that ” all contractors have complied and fulfilled the first part of the agreement, however, not a pesewa has been paid any of us”.

Should government refuse to adhere to their concerns, they have sworn heaven and earth to call and mobilize all communities where some of these uncompleted toilet facilities are being constructed to demonstrate massively against the government and Ghana First Company.

They said they will again press upon fellow contractors, families and workers not to vote.

Below is their Press Statement

Good day, Ladies and Gentlemen. We thank you all for honoring our invitation.

We have gathered here as members of the New World Contractors Association of Ghana; that is contractors who have been contracted by Ghana First Company Limited to build ultra-modern toilet facilities across the length and breadth of our country. Ghana First Company Limited is working in collaboration with the Local Government and Rural Development Ministry and Ministry of Water and Sanitation.

In fact, it is the MMDCE’s that grants the site for the project.
The project specifications and cost of each are stated below:

b) 16 seater at the cost of Three Hundred and Twenty-Six Thousand, Two Hundred and Fifty-Nine Ghana Cedis and Thirty Six pesewas (GHC 326,259.36),

1. The contracts were awarded to individual contractors between the period 2017 and 2019.

2. Contractors were to pre-finance the project and after 60% completion, the amount involved shall be paid to the contractor.

3. Furtherance to that, a letter was issued to each contractor specifying certain conditions. Copies of the letters have been provided here.

We are stating that all contractors have complied and fulfilled the first part of the agreement; however, not a pesewa has been paid any of us.

Meanwhile, the Vice President, Dr. Mahamudu Bawumia in delivering his address on the infrastructure projects executed by his government referred a lot of the projects we have done.

How can we be denied our money but for the government to claim credit for those projects?

We see this as a deliberate attempt by the Government and Ghana First Company to kill the spirit of contractors in this regard.

Our members procured loans from banks to execute the projects. Now, we are being chased by those banks for repayment. Several appeals to Mr. Frank Akuley, the C.E.O. of the Ghana First Company Limited have fallen on death ears.

He is blaming the government for the delays.
We are using this medium to draw the attention of the government to our plight. The government should come out to state its position on this matter. We don’t want to believe that this is a scam that has been endorsed by this government.

We are giving the government 10 days to respond to the following issues:

1. Explain to us the contractors, its position and involvement in the Ghana First Company issues,

3. Why the MMDCE’s refusal to perform their part of the contract with Ghana First Company by providing the land title documents as per their undertaken letters, (sample shown)

6. The government should intervene by helping Ghana First Company to have access to funds and pay the contractors.
OR

The government should take over the projects and also engage us, the affected contractors, on the way forward.
If the government refuses to adhere to our concerns, we will take the following actions.

a) We will call and mobilize all the communities where some of these uncompleted toilet facilities are being constructed to demonstrate massively against the government and Ghana First Company.

b) We will press upon members, their families, and workers not to vote and we will campaign massively against the government in this year’s elections.

c) Lastly, we will expose all the MMDCE’s who took between 5% – 15% from our members before awarding the contracts knowing very well that Ghana First took only 2%.
Thank you.

Ghanaians Praised MTN for refreshing their souls with the 2020 “MTN...

All set for Ashanti regional NPP Delegates’ Conference on Wednesday

Ghanaians have to pay for vaccines – Freddie Blay justifies introduction...

7 years after marriage, I was the one who got his...

I am not one to ever pontificate on who qualifies to...