Ghana’s education sector performance has become a top-tier issue in political campaigns ahead of the country’s election on December 7, with the leading political parties making a case to the electorates about investments and progress in the sector.

At a programme organized by the Ministry of Information to highlight the government’s achievements in the education sector since 2017, Education Minister- Dr Matthew Opoku Prempeh claimed that Ghana ranked 2nd in the 2018 Global Teacher Status Index and the claim has since been published by news websites.

The claim was again repeated in an interview on a local radio station, Peace Fm on October 30, and has again been published in online articles.

This fact-check report will examine the accuracy of the claim.

At the 6th Edition of the Nation Building Updates in Accra on the theme: “The Teacher at the Centre of Quality Education” on October 29, Dr Matthew Opoku Prempeh between the minutes 20:00 – 20:35 said:

“A world ranking study that came out shows that Ghana was ranked second in the teachers’ survey conducted by the Global Teacher Status Index. In a survey of 35 countries with 35,000 participants, they found out that for countries that respected teachers, and did more for teachers it improved their economy, and Ghana was rated second after China.”

On October 30, the Education Minister in an interview with Kwami Sefa Kayi on a local radio station- Peace FM between minutes 1:20 – 2:30 partly said: “Ghana was ranked second after China [on the Global Teacher Status].”

The Global Teacher Status Index (GTSI) is an in-depth opinion survey that examines the link between the status of teachers in society and the performance of children in school.

The survey collates public perceptions about issues such as teacher salaries, level of respect for teachers and how highly people rank their own education system.

The GTSI is conducted every 5 years and was first carried out in 2013, featuring 21 countries before 14 more countries were added in the second edition in 2018, with a study sample of 1,000 respondents in each country.

The countries involved in the Global Teacher Status Index 2018 were chosen on their performance in the Programme for International Student Assessment (PISA) and Trends in International Mathematics and Science Study (TIMSS) assessments to represent each major continent and as representative of different strands of education systems.

Both PISA and TIMSS rankings are internationally comparative student assessment that measures the performance of children on comparable educational tests across many countries of the world.

GhanaFact checks showed that Ghana scored 18.9 points out of 100 and ranked 32nd out of the 35 countries, contrary to the claims by the Education Minister- Dr Matthew Opoku Prempeh.

China emerged first followed by Malaysia and Taiwan in the second and third positions respectively. 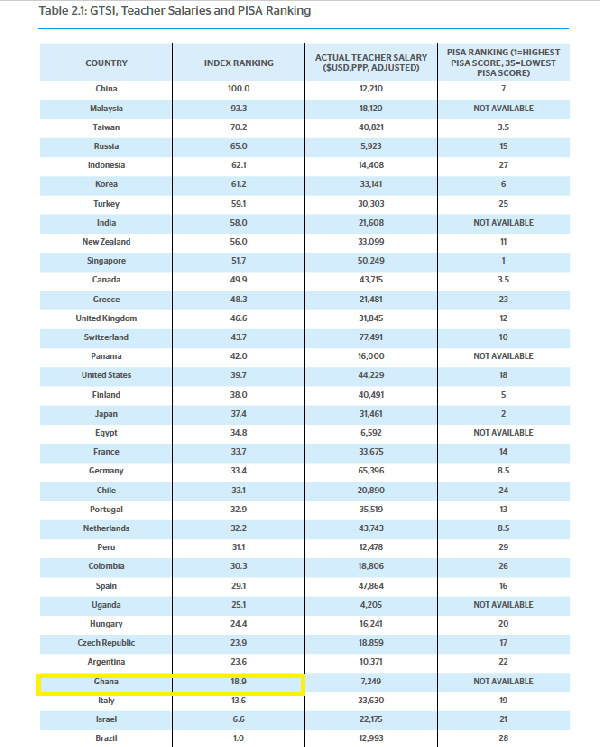 An Education Policy Research and Advocacy Organization, Africa Education Watch was the first to flag the claim made by the minister and in an interview with its Executive Director- Kofi Asare, he said the error was “unfortunate”.

“Daily Guide [media publishers] first published the story, you can fact-check them too. The data is what I presented,” Education Minister- Dr Matthew Opoku Prempeh told GhanaFact in an interview when alerted to our findings.

Subsequent checks on the online platform, dailyguidenetwork.com showed the platform published a story on October 22 with the headline “Ghana Places 2nd On Teachers Status Ranking”.

However, the online article does not provide any further details on where it sourced the information contained in its headline from in the body of the story.

The claim that Ghana ranked 2nd in the 2018 Global Teacher Status Index is FALSE.

CHASS threaten to close down SHSs over unpaid arrears

Religious leaders, CSOs unable to speak against LGBTQI for fear of being denied visas...

JUST IN: NABCO Beneficiaries Worry No More About The Disappearance Of...