Ex-Central Regional Chairman of the opposition National Democratic Congress (NDC), Mr Bernard Allotey Jacobs has brushed aside the notion that President of the Republic, Nana Addo Dankwa Akufo-Addo is corrupt.

With few days left for all the political parties to bring campaign activities to an end, the governing New Patriotic Party (NPP) and opposition National Democratic Congress (NDC), have adopted strategies they believe when relied upon, could be used in nailing their opponents down ahead of Monday’s polls.

For instance, an alleged bribery video involving Nana Akufo-Addo was released earlier this week. The video which shows the President receiving money went viral on the internet, with the NDC capitalizing on it to campaign against the NPP.

The NDC accused President Akufo-Addo of taking a $40,000 bribe from the wife of the Director of Urban Roads to keep him in office but the NPP in a counter-press conference cleared that he [Nana Addo] was receiving a donation towards the party’s #AriseForChange campaign in 2016.

Mustapha Hamid, the NPP’s Deputy Campaign Manager who spoke at the presser affirmed that the video was another attempt by the NDC to clamp them down. He said the video was doctored to suit their corruption tag for Mr Akufo-Addo.

However, Mr Allotey Jacobs of the NDC is certainly unenthused with such strategies where political parties or candidates resort to lies just to destroy their opponents.

He recalled how people lied that former President John Agyekum Kufour and his appointees had deposited huge sums of money at Prudential Bank in 2008, and therefore called for a “clean politics” this year, to move the country forward.

He has since thrown massive support for Nana Akufo-Addo using his Facebook page. To Alottey Jacobs, the President is not susceptible to corruption and will never be.

Nana Akuffo Addo is not corrupt

He cannot be corrupted

And will not corrupt

2008 Campaign about Prez Kufour and Appointees having huge amount of money deposited at Prudential Bank when it is not true, should not be part of this year election

Let us do clean politics to move Ghana politics forward

You win you win you lose you lose That’s All,” Allotey wrote on Facebook. 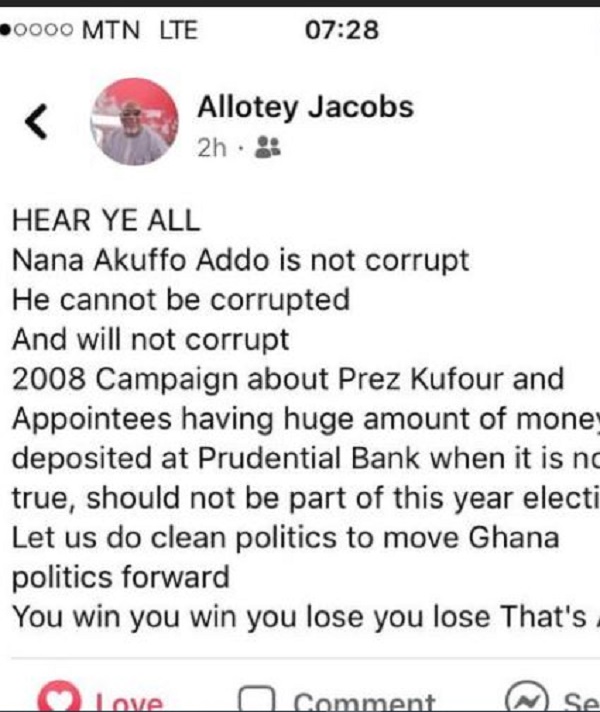 The ‘abandoned 3 wise men’ in Mahama’s era are now ‘relevant’...

Zorkor SHS students stand and eat in the sun and rain

250 journalists to be sponsored for training annually

‘You have the right to protest but not in a violent...

$150 Airport testing fee was a standard set to prohibits ….Richard...