Ashanti Regional Chairman of the governing NPP, Bernard Antwi-Bosiako, popularly known as Chairman Wontumi, is allegedly involved in a US$45 million cocoa road project awarded to him by the Ghana Cocoa Board.

Some screenshots of documents cited online by GhanaWeb indicate that an engineering company with one Bernard Antwi-Bosiako as director registered early 2018 under the name Hallmark Civil Engineering Limited, will construct a 23km road in the Western North Region.

The COCOBOD approval letter addressed to the Managing Director of Hallmark Civil Engineering Limited on reads: “We are pleased to inform you that Ghana Cocoa Board (COCOBOD) has approved the award of contract for the Construction of Dadieso-Akontombra Road (km 4.00-26.30), Awaso-Asawinso (Bibiani Jn) Western North Region to your company. Terms of the contract are as follows: Contract Price: Forty-Five Million, One Hundred and Ninety-Nine Thousand, Five Hundred and Twenty Six Dollars, Ninety-Six Cents (US$45,199,526.96). Contract Period: Twenty-Four Calendar Months.”

The letter further indicated: “payments under this contract shall be made in [Ghanaian] Cedis at the prevailing average Bank of Ghana Exchange Rate at the time of payment.

Checks from the Registrar-General’s Department show that Bernard Antwi-Boasiko, assumed to be Chairman Wontumi, who is the Ashanti Regional Chairman of the incumbent NPP, is registered as the Director of the company.

One Doris Quainoo is also a Director of the company.

Constance Wiafe is the Secretary, while Eddie Nikoi Accounting Consultancy is the Auditor.

This US$45million cocoa road project awarded to a political party chairman, on November 12, just a few days to the December elections, has got social media buzzing.

Find below the COCOBOD letter of approval: 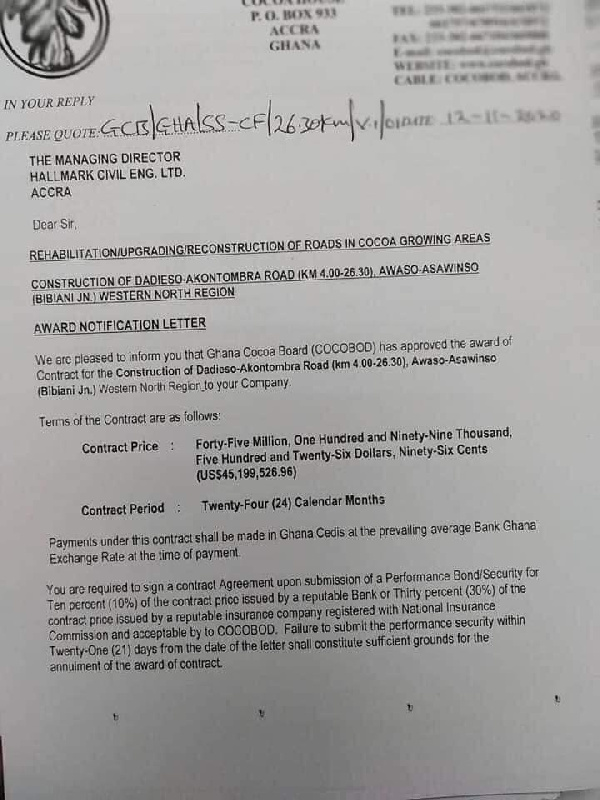 Mobile Money Limited handed over a 2-bedroom house worth over GHC 300,000.00 to Madam Rita Nhyiraba Tetteh

JUST IN: Fumbisi Rice Factory not under One District One Factory—Regional Minister

Majority leader unable to mobilize all his 137 plus 1 MPs–...

Hold small-scale miners to reclamation of lands — Traditional leaders to...

Removing Journalists from the court is an abuse about which the...

Businesses pace up and down in lorry terminals ahead of Election...