The government has outdoored specialised four-passenger quadricycles to drivers and Okada riders on hire-purchase for use as public transport.

The Bajaj Qute vehicles, according to a report by Citi News were outdoored on Saturday, November 28, 2020, by the Coastal Development Authority (CODA).

According to the report, Chief Executive Officer for CODA, Jerry Ahmed Shaib, said the vehicles were outdoored as part of the CODA Drive initiative to eradicate poverty and create wealth for commercial drivers as well as okada and Pragya riders.

“The operation of CODA Drive will initially be concentrated in rural areas and city outskirts in the six regions of the Coastal Development Zone,” the report said.

At the height of the debate on whether to legalise the Okada business or not, Vice President Mahamudu Bawumia proposed to offer new cars to the Okada riders on a lease basis.

According to the Vice President, Okada was a risky business and he was confident that the cars will offer them safety as commercial drivers.

The CODA initiative is also expected to help address road safety within the Coastal Development Zone. 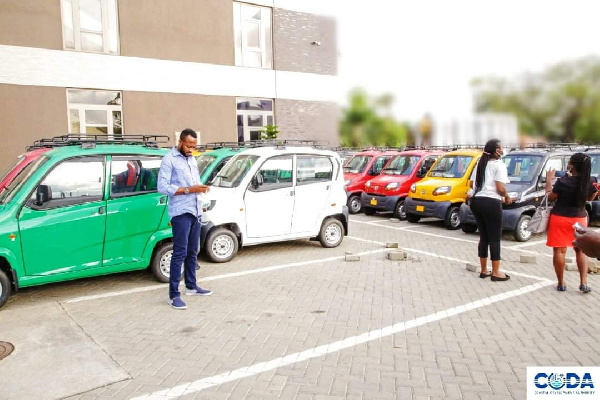 Government has taken a hard line against legalising the Okada business on grounds that their activities have led to numerous road accidents.

Former President John Dramani Mahama, who is the incumbent President Nana Addo Dankwa Akufo-Addo‘s main contender in the upcoming elections on December 7 has promised to legalise Okada if elected.

Your lip service to issues of development in Upper East Region...

“As northerners, we do things As if poverty was born and...

You know you didn’t win but told your protesters you won?...

President Akufo-Addo must listen to the overwhelming majority of Ghanaians including...

Journalist shocked with President Mentioned of ‘Jesus Christ’ during his Christmas...