Gloria Assan Arhin, the wife of the Director of Communications at the Presidency Mr Eugene Arhin has filed for divorce.

She filed the case at the High Court today February 10.

Mrs Gloria Assan Arhin is among other things praying the court to order her husband to pay her a sum of GHS2 million as compensation.

Mrs Gloria Assan Arhin, a former banker has alleged that her husband has been engaging in extramarital affairs with sidechicks.

She cited one Chantel Kudjawu as one of the women Eugen Arhin is allegedly having an affair with.

Mrs Arhin alleged that her husband presently has a child of about a year old with another woman.

She alleged that her husband sometimes spend the nights with the women and when confronted easily gets angry and subjects her to physical abuse.

“When I confront him on it, he yelled at me and sometimes verbally, emotionally, psychologically and physically abused me in the presence of our children. Respondent [husband] told me in one of the verbal abuses that I was not woman enough for him that is why he is involved with these other women.”

Mrs Arhin added that her husband has reduced her to a stranger and hardly communicates or spends any time with her except to bicker and quarrel which has caused her to live in a state of constant emotional stress and anguish.

She indicated that after their third child, her husband deceived her to undergo Tubal Ligation/Female sterilization (a procedure which effectively makes it impossible for her to get pregnant again) based on the promise /assurances from the husband that he did not want any more kids and that the three children were enough only for him to in less than two (2) years go ahead and have a child with another woman.

According to the wife, her husband, knowing very well that, he did not want the marriage again, failed to disclose same to her but misled her to have a Tubal ligation only for him to start a new family in less than a year after the procedure.

“My husband has been repeatedly beating me even in the presence of the children and warned me not to touch anything in the house that is his. My husband banned me from entering any of the landed properties acquired in the course of our marriage and took away all the documents to the properties which were initially in my custody for sale keeping.”

Mrs Arhin intimated that her husband informed her that he had to travel to pursue a course at George Town University, a claim which she knew very well to be false and only used it as a means to travel out of the country to spend time with one of his mistresses and his other child.

According to her, during the pendency of the marriage, she and the husband through their joint efforts acquired or developed various movable/immovable properties.

She added a residential building situated at Senya Breku in the Central Region where she comes from. A water front residential property/resort situate at Ada Foah in the Greater Accra region and 3K Barbering shop at Teshie.

That aside, she said the financial contributions made by her towards the acquisition and/or development of these properties. She intimated that she was also in charge of the supervision of the construction of the projects and spent almost all of her days on construction sites supervising the workmen and ensuring the project was going on smoothly.

According to her, she did all these while also taking care of the home and the children among others.

That of the vehicles acquired, she said her husband gifted his interest in the Toyota Lexus, the Hyundai Elantra and Toyota Tundra to her pursuant to which the said vehicles were duly registered in her name.

She further prayed the Court that vehicles with registration numbers GE 4646-18 and GE 7108-18 be settled in favour of her. She wants to be declared a joint owner in equal share with the husband in all the other properties acquired in the course of the marriage.

Below is the court documents: 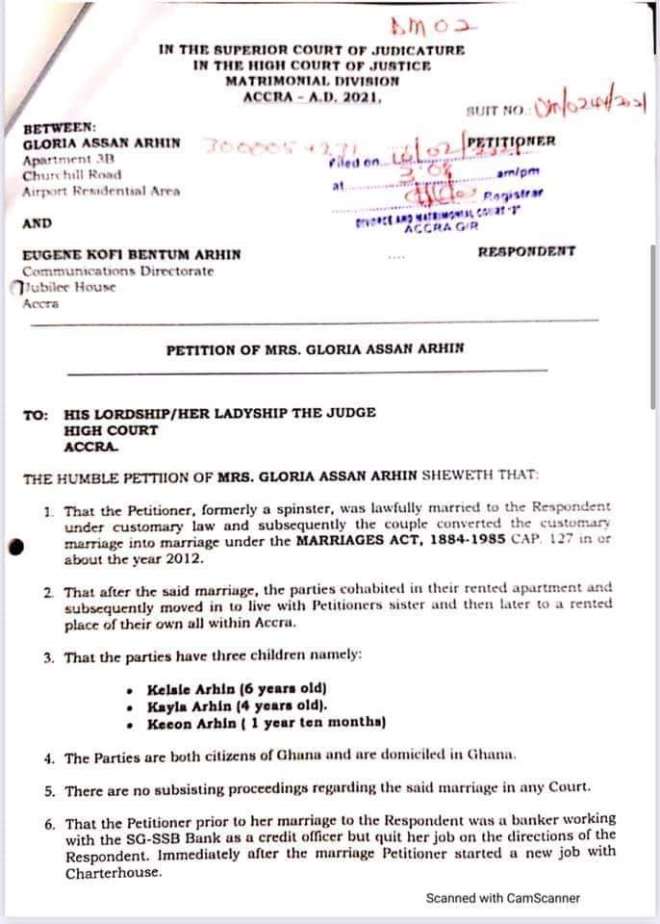 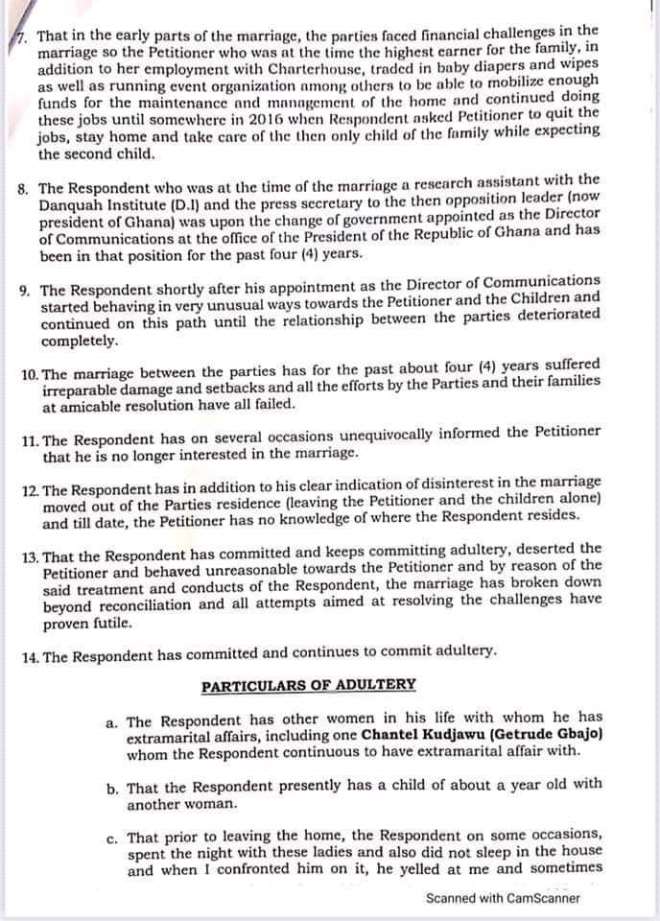 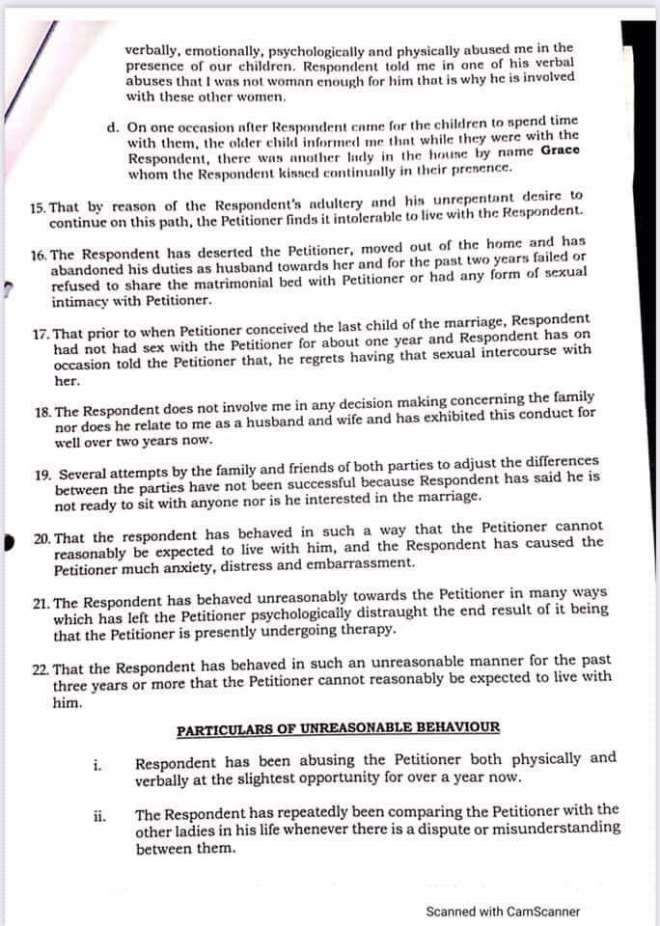 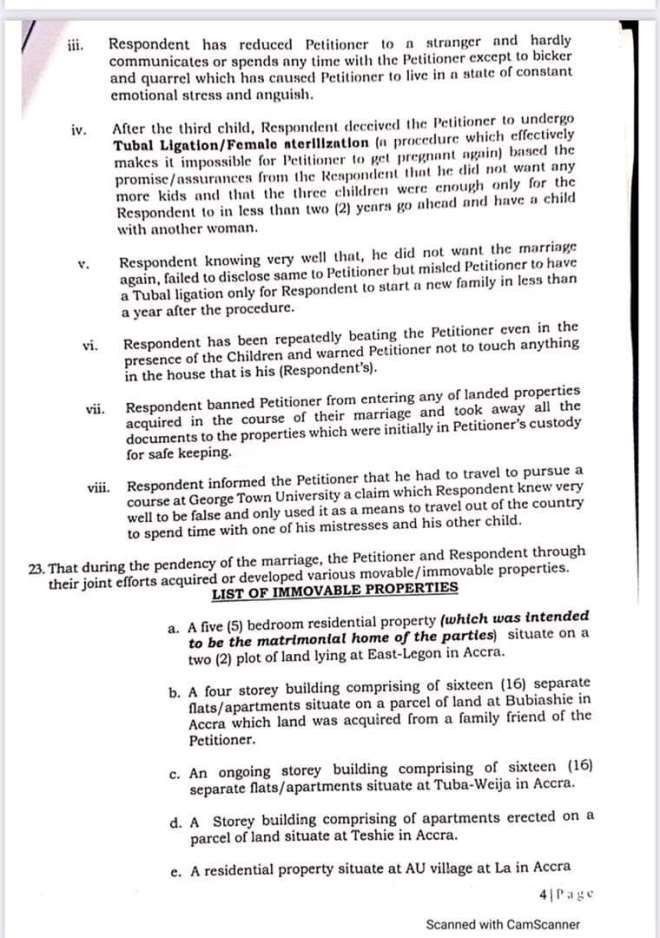 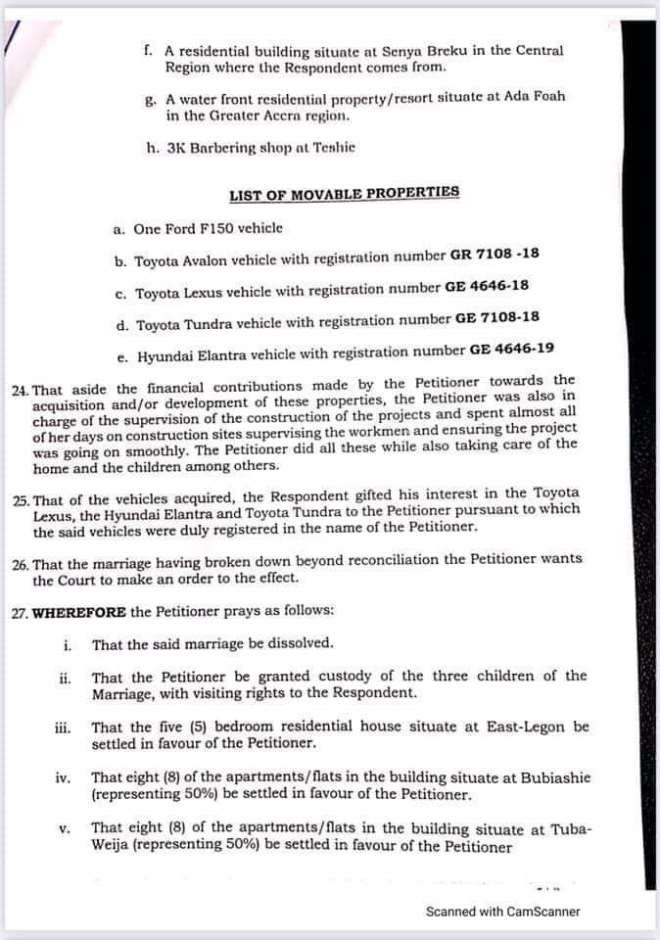 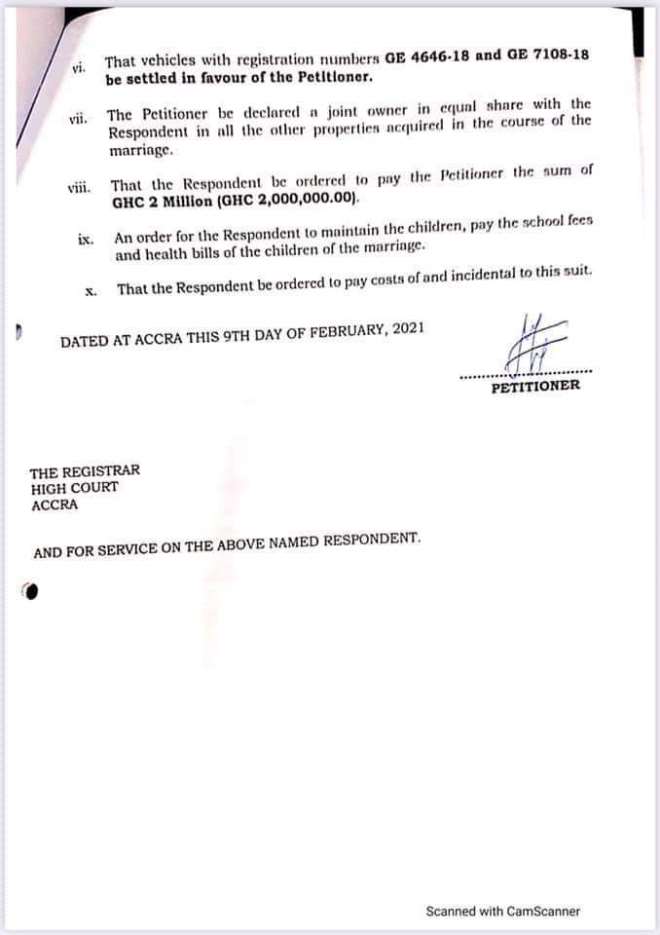 The alleged insecurity and the leaked tape: Rawlings’s concerns were indeed...

The National Democratic Congress To Sue The Electoral Commission

I have never actively attempted to do politics—Robert Ajene

Assin North MP ask not to represent his people in Parliament...